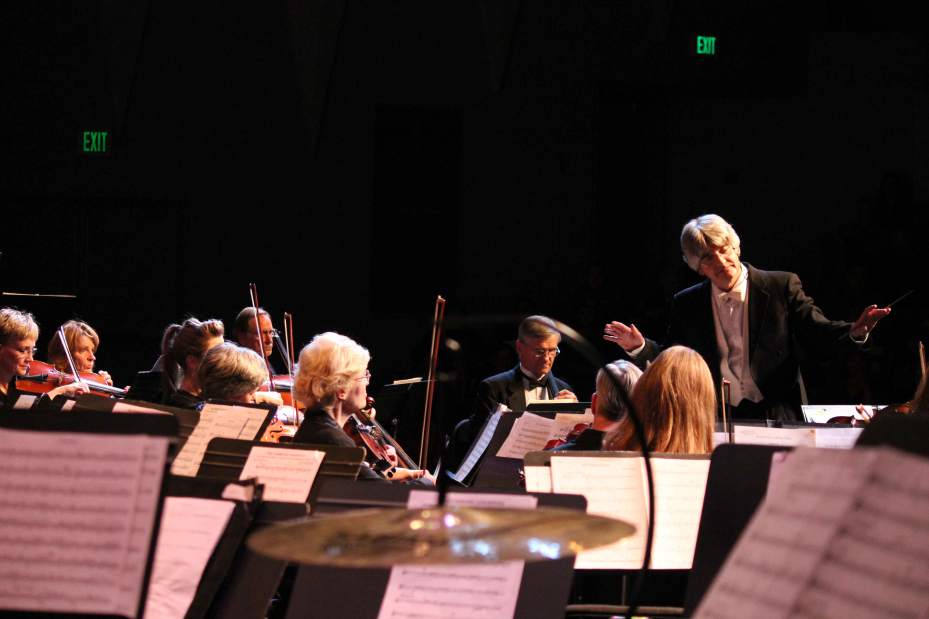 LA GRANDE, OREGON__The Grande Ronde Symphony Association celebrated 70 years of music during their annual fundraising event in La Grande last month. The evening included a meal catered by Chef Merlyn Baker and an auction offering a wide variety of items donated by the community. Entertainment showcased music from the different decades of the Grande Ronde Symphony Orchestra’s existence, beginning in the late 1940s and moving on through to contemporary tunes. Also featured were award-winning wines and brews from Echo Ridge Cellars of Echo, Oregon, and Barley Brown’s Brew Pub of Baker City.

The music, food, and decorations provided a retrospective, but the evening also looked to the future when the Association introduced attendees to the new music director, Zachary Banks.

The Grande Ronde Symphony Orchestra is believed to be the oldest continuously operating community symphony orchestra west of the Mississippi. The orchestra began at Eastern Oregon College in 1946 with faculty and student musicians. The first meeting of the newly formed Grande Ronde Symphony association was held at Eastern Oregon College on December 5, 1951, followed quickly by the adoption of a constitution, bylaws and election of officers and board members. The organization has been ongoing ever since.

The orchestra presents an annual series of three concerts in Eastern Oregon University’s McKenzie Theater in Loso Hall and one concert in Baker City.  The orchestra also performs at other events such as the annual Holiday Music Festival. Many of the musicians in the orchestra form smaller ensembles to perform chamber concerts in area homes, as well.

Grande Ronde Symphony Association is excited to ask the question, What’s New with You? as the orchestra begins its 71st season, under the baton of the new Music Director, Zachary Banks. The concert takes place Wednesday, November 14, 2018, at 7:00 p.m. in McKenzie Theater on the EOU campus in La Grande.

According to Mr. Banks, “We are honored to be presenting the season’s fall concert, entitled, “What’s New with You?.” The finale of the program is Dvorak’s Symphony No. 9 in E minor, From the New World. Banks continued, “This work, written during the composer’s visit to America, is compelling, poignant, and timeless. It is truly a masterwork that is not to be missed! Works by Mozart and Mendelssohn will be opening the program.”

The Association’s President, Alice Trindle, further commented, “The theme chosen for the beginning of the 71st season as Oregon’s longest continuously performing community orchestra, could not be more appropriate. We will be celebrating our new Music Director, while looking forward to many new activities of the Grande Ronde Symphony Association.”

Ms. Trindle continued, “Zach was born and raised in Northwest Indiana and began his musical studies at age 10. Carrying his passion for music into his higher education, Mr. Banks moved to Oregon in 2010, and earned his Bachelor and Master degrees in cello performance from Portland State University. He recently taught in positions with the Portland Youth Philharmonic and the Metropolitan Youth Symphony, and currently is an educator and conductor for numerous programs within the Oregon East Symphony in Pendleton.”

Tickets can be purchased in advance at Direct Music Source, 1010 Adams in La Grande, or at Betty’s Books, 1813 Main Street in Baker City or online at granderondesymphony.org. Tickets may also be purchased at the door of McKenzie Theater.

Concert Schedule 2018-2019
Concerts and chamber concerts begin at 7:00 pm.  (This does not apply to the Holiday Music Festival which is sponsored by Eastern Oregon University.)

Go to the orchestra’s website for more information and the Chamber Concert Series schedule. Get updates from the GRSA sent straight to your inbox! Click here to view the latest edition. Email grsapresident@gmail.com or call 541-805-5574 to subscribe!